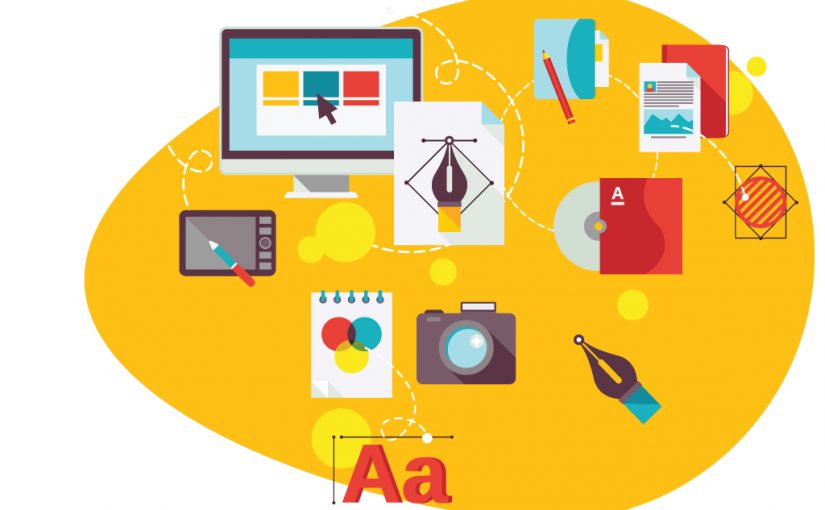 Since we specialize in graphic design, we found it fitting to feature a blog about our chosen field, its history, and where it is at now. Graphic design has always been intricately tied to the era in which it’s produced. Since the origin of the printing press, it’s played a key role in how we communicate. The art of graphic design is somewhat hard to define, as it entails everything from the design of memorable logos to lush, immersive book covers.

Indeed, it wasn’t until 1922 that book designer William Addison Dwiggins coined the term. What’s clear is that graphic designers are deeply connected to technological trends. Moreover, they typically design to express a brand rather than for their own creative expression. Graphic design, then, is a specific form of visual language. Let’s look at how this language has evolved over the centuries.

The Origins of Graphic Design

Graphic design essentially began with the creation of typefaces, which were used in printing presses to mass-produce written content. One of the earliest typefaces was Trajan, and it’s actually still used by today’s graphic designers. The printing industry also invented logos; printing companies used pictographic representations to label the documents they produced. In time, graphic design encompassed complex combinations of pictures and typography, as well as logos and word marks.

Emerging after the Industrial Revolution, Art Nouveau features organic flourishes, elegant shapes, and ornate typography. Today, it has a bit of a vintage look but can still be seen in designs such as the General Electric logo.

The style we associate with the Roaring Twenties and the Prohibition Era is called Art Deco. It features geometric elements, high color contrast, bold typography, and gold flourishes. Designers use this distinctive style in throwback designers.

During the 1950s, graphic designers made a deliberate departure from past styles. The modernist style features thick, smooth lines, bold colors, and open designs. It can still be seen in logos such as AirBnB and NASA.

The Use of Graphic Design in Marketing

Graphic design used to revolve around illustration and typography, dating back to the ads in corantos (newspapers of the early 17th century). As printing techniques improved, we began to see print marketing emerge in the form of chromolithographs, which were often used to reproduce advertisements. With advancements in printing technology, ads evolved into a complex communication style, especially in the text-heavy ads that appeared in periodicals of the 1940s and 50s.

In time, typographic elements began to give way to image-forward designs. Now, graphic design can communicate a brand’s long history, cultural assets, and core values with a single logo. We’ve always been a highly visual species, but graphic designers have helped us refine our visual communication style.

The Importance of Graphic Design

Graphic design is crucial to marketing efforts. Designers create the visual presence that helps brands connect with their audiences. Everything from emails to social media needs custom, branded design. Each piece must be carefully cued into its intended platform and audience. Now that marketing has expanded into the digital sphere, there is high demand for graphic designers, crossing all forms of media.

We’ve come a long way since the dawn of printing. Now, we thrive in the age of the image, where decades of visual communication and technological advances have led us to a shared visual language. The core principles of graphic design reflect years of tradition and culture. Good design taps into our psychology to cross boundaries and forge deep connections. That makes graphic designers essential architects of our shared experience.