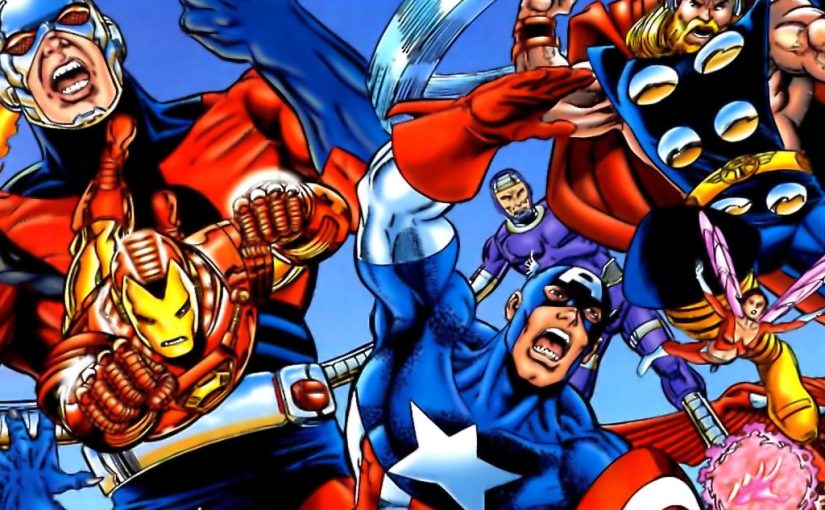 Marvel, a popular comic and comic film company, has a striking red logo with white lettering. The Marvel logo is bold and powerful, evoking connotations of power and strength. However, the logo has not always been so simple. Check out how this logo has evolved over time.

Before Marvel became Marvel, it was called Timely Comics. Timely Comics’ logo was created in 1939. For this logo, the company’s name is separated by a medieval European heater shield, and it follows the color scheme of red, white, and blue. This color scheme and logo bring to mind Captain America, one of the company’s first bestsellers. Publisher Martin Goodman created this logo.

Then, in 1951, the company became Atlas Comics and had a logo change with the name change. The logo during that time was a globe encapsulated by the word “Atlas.”

By the year 1957, Stan Lee was writing comics for Atlas, and they began using the Marvel Comics name and logo. At the time, it was a black circle with a red background and “Marvel Comics.” In 1960, to compete with DC Comics, their primary competitor, Marvel released a new, less striking logo with “M” and “C” printed above one another.

Soon after, an explosion of popular comics emerged, including The Amazing Spider-Man, The Fantastic Four, and The Incredible Hulk. With this success, the company decided to change the logo and name to “Marvel Comics Group.” This logo remained pretty consistent throughout the 70s and 80s.

The 1993 – 1996 version of the logo is reminiscent of the MTV logo with a large “M” as the primary feature. The Comics version was bright red with yellow lettering across the M saying Comics. With the introduction of Marvel films, the film version of the logo is slightly different, The bottom part of the “M” looks like old film and even has a gradient color of black to suggest movement. From the film, the word “Marvel” grows in the same coloring.

The film here does appear to be made of something more robust than film, perhaps a metal to represent superhero strength. Splashed across the front in a red script is the word “Films” to make it clear that this logo represented the film component of the business. The wording is also outlined in a thin yellow line to suggest life and even a fire like quality to suggest high action and excitement.

The logo that lasted between 1996 and 2002 is similar to its predecessor with a few changes. In the lower-left, they added a light source that casts a yellowish hue. This also makes it easier to tell that the logo is indeed metal in nature. On the right side, the yellow is contrasted by a cobalt blue, which adds some intrigue and great coloring to the logo. “Films” is also changed to “Studios” to provide more opportunities for featuring the logo in different types of mediums.

The red rectangle with the name “Marvel” written in white capital across the box premiered in 2002 in the later parts of X-Men. Red is a purposeful choice here because the color often represents strength and determination. Most of the letters are attached to one another, except for the final “L.” This logo lasted from 2002 to 2008, and the logos that follow it will remain pretty similar in the general styling of this logo. Marvel used this logo in publications as well as early movies.

With the beginnings of the Marvel Cinematic Universe came a new logo. A new version of the red logo will be used from 2008 to 2013. Removing the “studios” designation from the red rectangle, Marvel took the bold red and white logo and added “Studios” across the bottom, framed by a set of parallel lines. The word “Studios” is in all caps, spaced out in a san-serif font different from the bold “Marvel” above it. This version first emerged in the first of the Iron Man movies. It was used until the fifth Captain America movie.

From 2013 to 2016, Marvel ran with a similar concept. However, this time, they removed the “Studios” from the bottom of the red rectangle and put it on a white backdrop. As a result, the font color changed from white to black, and the font became one with cleaner lines and a more squared-off look.

In 2016, a new logo began to be used, and this one is still used today. Now, the red “Marvel” rectangle is smaller and sits to the right of the word “Studios.” Like the other recent iterations, nothing changes about the font or coloring of the word “Marvel” here, only the location. “Studios” then moves from underneath the “Marvel” name to the left of the name.

Like the 2008 version, “Studios” gets its own horizontal, perpendicular lines frame. The logo is clean and striking with a nice, defined look with the red rectangle and the black frame. This logo premiered with the film Doctor Strange.